The Year of the Book, by Andrea Cheng, earns the Literary Classics Seal of Approval. 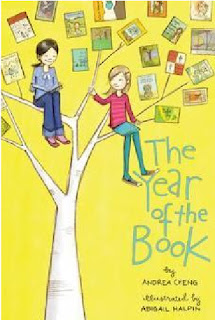 The Year of the Book, by Andrea Cheng, is the story of a young girl, Anna Wang, who has a hard time accepting that she is different.  She is of Chinese descent and the daughter of a mother who cleans buildings and a father who manages a convenience store. Anna does her best to 'blend in' with the other kids in school.  When some of her schoolmates ask her what her mother does for a living, she tells them that she works in a high rise professional building downtown, leaving out the fact that she actually performs janitorial duties there.  Meanwhile, Anna finds a means of escape through the books she reads.  As she becomes more engrossed in her reading, she gradually pushes more and more people out of her life, including one of her closest friends.  As the story progresses, Anna learns that no-one seems to be judging her for her differences as much as she herself seems to; that in fact, others are intrigued by those things that make her unique.  Eventually, she learns to embrace her culture and while she still enjoys reading, she does not make her books a priority over her friendships and responsibilities.

This is a valuable book with a relevant message for young readers. Recommended for 4th grade to middle-school level readers, The Year of the Book will speak to kids on the importance of respect for self and others.