Running with the Wolves, by J.E. Reed, earns the Literary Classics Seal of Approval 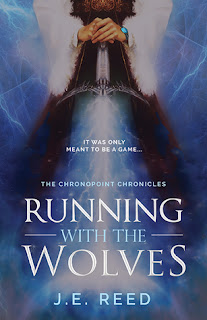 Kiuno woke up one morning in a mild state of amnesia with nothing but the clothes on her back and a bracelet with her "name" on it. While she can vaguely recall her life back home, the forest she now finds herself in seems somehow familiar as well.  She comes to remember that Kiuno is her online ID for a video game she plays, called Chronopoint.  She also remembers she has a husband and an ordinary life back home. Eventually, she decides to look for civilization, hoping to find some of the other players she knows through their shared online experience. Instead, she meets strangers with whom she forms an alliance and they set out together to find her online friends and her real-world husband. Ultimately, she wants nothing more than to find her way out of the game, which is comprised of ten realms. But in her new reality, the one which takes place in the very real world of Chronopoint, everyone is a potential threat who may be willing to kill to survive so they can find their way to the tenth realm and get back home.

Running with the Wolves is an action-packed thriller with complex characters and an unpredictable storyline.  Author J.E. Reed has created a mysterious fantasy world in which monsters and magic seamlessly intertwine.  With captivating plots and subplots which keep readers guessing throughout, Running with the Wolves is recommended for home and school libraries, and has earned the Literary Classics Seal of Approval.