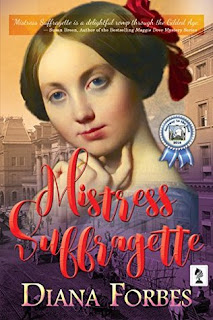 Following the panic of 1893 Penelope Stanton's family has fallen into hard times financially.  Whoever said money can't buy love was not thinking of Penelope's fiance who, upon learning of her hardship, called off the wedding.  Now her mother expects her to find a wealthy suitor to make all things right again with the family.  But instead, she falls for a philandering philanthropist, a married man named Edgar Daggers. In the 1890s, a time when the women's suffragette movement is just beginning to gain traction, Penelope tries to find her own way as she sorts through her ideals and the harsh realities of life, which she comes to realize are often at odds with one another.

Author Diana Forbes has penned an entirely compelling novel with historical relevance, exceptional prose, and enough conflict to keep this story moving along at a nice clip.  Mistress Suffragette is recommended for home and school libraries and has earned the Literary Classics Seal of Approval.