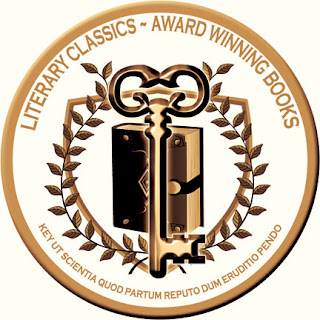 My Body is Special and Belongs to Me
Written by Sally Berenzweig, MEd, MA & Cherie Benjoseph, LCSW,
illustrated by Lilah Cohen

Daria Rose and The Day She Chose
Written by Yvonne Capitelli, illustrated by Sherri Forrester Baldy

The Magic of Finkleton
Written by K.C. Hilton

The Secret of the Sacred Scarab
Written by Fiona Ingram

All final award levels and categories will be announced October 15, 2011.

Literary Classics, an organization dedicated to furthering excellence in literature, takes great pride in its role to help promote classic children's literature which appeals to youth, while educating and encouraging positive values in the impressionable young minds of future generations.  Judging is based upon the criteria set forth by Literary Classics' highly selective awards committee which honors books promoting character, vision, creativity and learning, through content which possesses the key elements found in well-crafted literature.

The Literary Classics judging committee is comprised of experts with backgrounds in publishing, writing, editing, design, illustration, and book reviewing.
Posted by Author.Pub at 1:25 PM No comments: 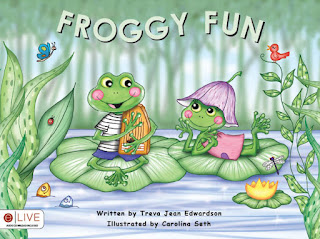 Froggy Fun, by Treva Jean Edwardson and illustrated by Carolina Seth, is the heartwarming tale of two frogs who live in the fanciful land of Fernleaf Forest.  This rhyming picture book, illustrated with wonderfully engaging and expressive characters, is a delightful story full of warmth and charm.  Franny, who is Freddy's biggest fan, does her best to encourage her friend to play his autoharp for the others in Fernleaf Forest.  Freddy however, is too shy and only shares his musical talent with her.   When Franny and Freddy become separated during a game of hide-and-seek, Freddy fears he may never find his dear friend Franny ever again.  Later, when the two are reunited, Freddy is so elated that he plays a joyful tune in celebration.   All the woodland creatures in Fernleaf Forest, including the flowers, join along in the happy song as their hearts swell with joy.
Beautifully and reverently told, Edwardson has penned a story rooted in love and steeped in devotion in this lyrical book. 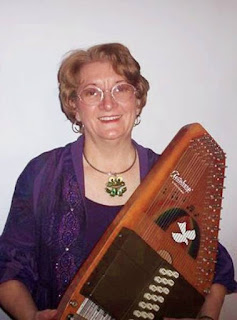 Froggy Fun is  also available in an audio format which may be downloaded with a coupon code once the book has been purchased.  The author, in her enchanting audio version of this book, is simply fabulous.  While participating in the audio version of this book, one can't help but feel as though they've been wrapped in a big hug.
This book earns the Children's Literary Classics Seal of Approval, a designation reserved for those books which uphold the rigorous criteria set forth by the Children's Literary Classics review committee, a team comprised of individuals with backgrounds in publishing, editing, writing, illustration and graphic design.

The Golden Pathway, a tale of compassion and courage. 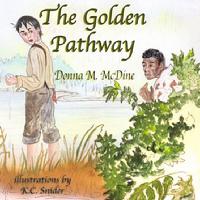 The Golden Pathway, written by Donna M. McDine and illustrated by KC Snider, is an inspiring story of a young boy, named David, who helps his father's slave escape to freedom.  Day after day, David watches from a distance as his alcoholic father brutally and mercilessly beats their slave, Jenkins, who is just a boy himself.  David knows all too well that the beatings will only continue and becomes concerned that Jenkins may not survive the onslaught of physical abuse.  Eventually David finds a way, with the aid of those operating the underground railroad, to help Jenkins escape his life of slavery and affliction
The Golden Pathway is a tale of compassion and courage.  This book earns the Children's Literary Classics Seal of Approval, a designation reserved for those books which uphold the rigorous criteria set forth by the Children's Literary Classics review committee, a team comprised of individuals with backgrounds in publishing, editing, writing, illustration and graphic design.