Frozen, by Elle A. Rose, earns the Literary Classics Seal of Approval 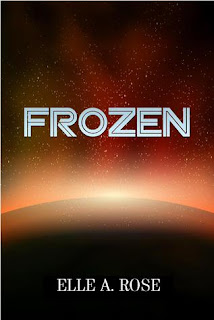 It is the future and the human race has been virtually annihilated.  Xerceptavodes, alien beings, have taken over the earth, leaving those humans remaining little with which to subsist.  But a bizarre phenomenon causes all the Xerceptavodes to be frozen once a year on All Hallows Eve, allowing humans to scavenge for food and other provisions to aid in their survival.

Verick, a sixteen year old boy, has been training for the upcoming Halloween mission.  He is ready and willing to face the inherent dangers of scavenging on this critical night when those in the spirit world will try to snuff out anyone found foraging.  Verick's success is critical in order to help provide for his family's needs for the coming year.

Author Elle A. Rose has created a fantastically original story in which young Verick comes of age. When Verick turns seventeen he must choose a mate who he will then marry on his eighteenth birthday.  With his birthday just months away, the importance of choosing a wife weighs heavily on his mind.
This  post-apocalyptic sci-fi novel is a wildly imaginative and intriguing page-turner.