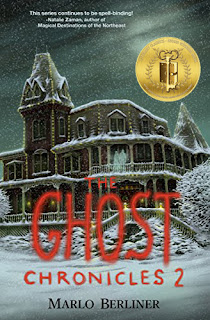 Michael and Sarah are dead, but they’ve been in a state of limbo for some time now.  Michael has a mentor, but a lot of good that does him, since all he seems to do is wait for Michael to figure things out on his own anyway.  So now it would appear that there’s a place where you go after you die . . . maybe.  His mentor doesn’t really know, so there’s that.  But what they’re just beginning to understand is more chilling than death itself.  It would appear they might just have to go to hell, and maybe, just maybe that’s how they’ll reach heaven.


Author Marlo Berlinger’s The Ghost Chronicles 2 is a paranormal romance that is skillfully written with lot’s of interesting sub-plots and loads of humor for good measure.  This YA crossover will hold great appeal to a broad audience of readership and is recommended for home and school libraries and has earned the Literary Classics Seal of Approval.