The Deepest Cut has earned the Literary Classics Seal of Approval 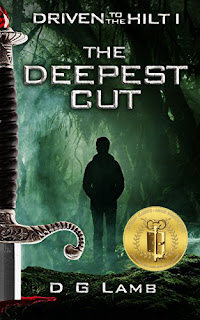 Joshua is trapped in a mining colony on Cypress Grove, a planet infested by creatures so deadly humans have been trapped inside their compound for decades.  One wrong move and he could be dead.  Escape seems unlikely; but if he can make it out alive, he’ll have to contend with the colony’s criminal underworld.  Even then, he’ll likely be ostracized as a social outcast because of his father’s alleged betrayal.


A serious sci-fi read with grit and substance, this book offers so much more than it would first appear.  Driven to the Hilt: The Deepest Cut, by DG Lamb is a wildly thrilling page-turner that will keep readers in suspense clear to the last page and beyond.  Recommended for home and school libraries, Driven to the Hilt: The Deepest Cut, has earned the Literary Classics Seal of Approval.