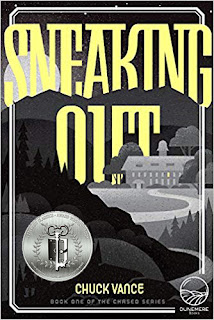 Oscar had one thing on his mind.  He was bent on sneaking out at two in the morning to meet up with a couple girls from their boarding school.  Nothing ever seemed to phase Oscar.  If he got caught he’d probably just brush it off . . . no big deal.  If Luke got caught, though, he could get expelled.  Luke wasn’t feeling quite so brave, but still it seemed worth it to be meeting up with Pippa, the pretty new Junior at St. Benedicts.  But then, while hiding under cover in the early hours the foursome overheard a hushed conversation, and the next morning they learned the Dean’s wife had been found on campus, dead from unnatural causes.  And this time it looked like Oscar wouldn’t be getting off so easy.  When it looks like Oscar is going to catch the blame for the murder, Luke sets out to find the true killer.

Sneaking Out, book 1 in The Chased series by Chuck Vance, is a suspenseful new YA murder mystery thriller.  This book has all the elements of a good mystery.  And to top it off, Luke possesses some pretty impressive skills to help him as he tries to find the killer.  A solid plot with a strong backstory and well-developed characters helps this book really shine.   Recommended for home and school libraries, Sneaking Out is recommended for home and school libraries and has earned the Literary Classics Seal of Approval.

Email ThisBlogThis!Share to TwitterShare to FacebookShare to Pinterest
Labels: Best YA books for teens, Teen Thriller Series, YA mystery, YA Whodunit