The Hidden City of Chelldrah-ham, by Stephan von Clinkerhoffen, has earned the Literary Classics Seal of Approval. 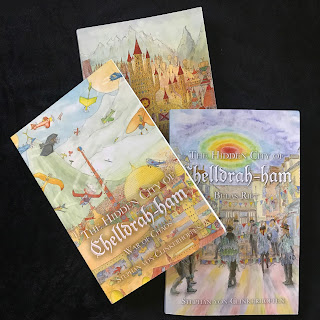 In a land of great riches, with inhabitants who live to be centuries old, lives a boy, Stig.  Stig is quite good at inventing tools and gadgets with the use of clockwork mechanisms.  One fateful day though, his inventive tinkering leads him to a life-altering discovery.  While taking a test-run in his new flying machine, he experiences a crash-landing.  His accident, however, may prove to be a blessing in disguise as he soon learns his beloved city of Chelldrah-ham is in danger.  But returning home to forewarn the people of Chelldrah-ham proves to be a challenge far greater than he could ever have imagined.  Stig becomes embroiled in a sequence of riveting events all of which make for an engaging series of fantasy fiction for young readers.

Each of the three books in this magical collection are full of wonder and imagination with delightfully multi-faceted characters and a plot which keeps readers enthralled throughout this dynamic series.  With a background in engineering and art, author Stephan von Clinkerhoffen lends a unique perspective to this enchanting series which he both wrote and illustrated.  Imaginations will soar from one captivating page to the next as readers indulge in this fanciful set of books.  The Hidden City of Chelldrah-ham fantasy fiction series is highly recommended for home and school libraries and has earned the Literary Classics Seal of Approval.