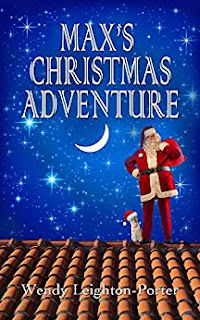 With the aid of an owl charm, Joe and Jemima’s cat, Max, can communicate with humans.  So, when Max finds Santa on the rooftop in the balmy month of August he’s able to chat with the jolly fellow to learn what brings him around so unseasonably early.  Max discovers Jemima has sent a letter to Father Christmas soliciting his help in finding her parents who’ve been trapped in an alternate dimension in time.  In short order Max accepts Santa’s invitation to help learn the whereabouts of Joe and Jemima’s parents.  The two are soon whisked away by a team of reindeer as they set off on an incredible journey through space and time.