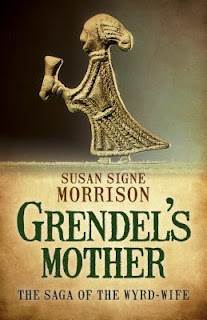 Grendel's Mother, by Susan Sign Morrison, is a book which offers a unique perspective on the highly debated classic, Beowulf.  Commonly cited as one of the most important works of Old English literature, Beowulf is the longest epic poem known to be penned in Old English.  Of particular note, Grendel's mother has been the subject of ongoing controversy, with scholars differing in opinion over aspects of her persona because she was never directly described in the original manuscript.

In contrast to some interpretations of Grendel's mother, this book casts light on the story of Brimhild, the kind-hearted and loving matriarch who might have been.  Skillfully penned in a style which flows remarkably well, while masterfully incorporating an old world flair, this book transports readers to medieval Denmark and the fascinating world of Grendel.  The tale of a young child set adrift at sea, the story describes Brimhild's childhood as she is raised by a Scylding family. Her life at court and later years as an outcast make for a truly a compelling story.

This book reads well as a stand-alone, but would be an excellent companion piece as a prequel for those seeking greater depth, or an alternate view, of Beowulf.  Grendel's Mother is highly recommended for home and school libraries and as a teaching tool for educators.  This book has earned the Literary Classics Seal of Approval.

Email ThisBlogThis!Share to TwitterShare to FacebookShare to Pinterest
Labels: Books which expound upon the story of Beowulf, Companion reading to Beowulf, Prequel to Beowulf, Recommended reading for fans of medieval literature