The King of Average, by Gary Schwartz, earns the Literary Classics Seal of Approval 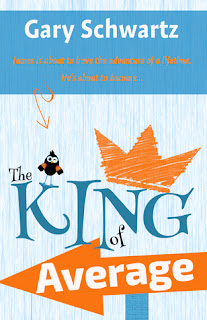 James is average in most every way.  His grades are mediocre, he's medium in height and build.  In fact, there's absolutely nothing about James that sets him apart in any way.  He's just an incredibly normal kid.  One day, he muses aloud that he's so very ordinary he could quite possibly be the king of average. And that's when James' world begins to shift.  He's suddenly transported to the land of Average, where everything is quite literally average.  Except, as he soon learns, the current king of Average has gone missing.  James is challenged with a mission, find the king of Average, learn why he departed, then return to claim his title as the new king.  James happily accepts his quest and he, along with a motley crew of new companions set out to find the missing royal.

Author Gary Schwartz has crafted a brilliant read for middle grade audiences.  Replete with witty phrases and loads of powerful symbolism, The King of Average is not your average ho-hum read.  This book has incredible depth with a delightfully engaging plot, threads of humor throughout, and a resounding underlying message that is truly inspired. Recommended for home and school libraries, The King of Average receives our highest recommendation and has earned the Literary Classics Seal of Approval.

Email ThisBlogThis!Share to TwitterShare to FacebookShare to Pinterest
Labels: Best books for grade school students, Best chapter books, Books for kids about striving for greatness, Books for kids with a message of forgiveness, Recommended books for middle grade students