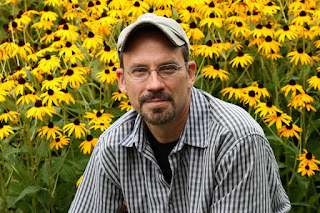 WHEN DID YOU FIRST KNOW YOU WANTED TO BE A WRITER AND WHY?
While in high school I took two writing classes with a very popular teacher. Her name was Joan Hayes and she did not marry until her retirement from teaching. Miss Hayes had a colorful past. She was a former mother superior and before that she assembled bombs in a factory for a living. She brought amazing love and energy into her teaching and I took Creative Writing I & II with her during my junior and senior years. That’s when I first got the idea that I might want to be a writer when I grew up.
​
When I entered college I discovered the short stories of Ray Bradbury. This changed my life forever and I fell in love with the magic of good writing, of how a story could affect a reader emotionally. That’s when I knew, more than anything else, that I wanted to be a writer and tell exciting stories for the rest of my life.
​
AS A CHILD, WHAT DID YOU ASPIRE TO BE WHEN YOU GREW UP?
The very first thing I wanted to be when I was grew up an architect. I loved buildings of all sorts, from houses to churches to skyscrapers. I used to build house models from scratch using balsawood for the framing and thin cardboard for the wallboard and sheathing. I’d cut strips of heavy paper to make my own siding shingles and strips of fine black sandpaper to make roofing shingles. I built about a dozen houses like this, finishing the interiors with paint, carpeting, and I even made my own miniature furniture. Only one of those houses remains intact today. All the rest I dissembled because they took up too much room, but I have pictures of three of them. I built the house models from blueprints my father got for me.
​
HOW DID YOU GET THE IDEA FOR YOUR AWARD WINNING TITLE?
My mom often told me stories about her life before I was born. We were sitting on the back deck one September day when I was about 21 or 22, and we were noting that sweater weather would soon arrive. She then told me about a sweater she’d knitted for my father (before I was born) that he only got to wear once. He got it dirty right away with food stains. When she washed and dried it for the first time it stretched! It was too big for him, so my mom’s uncle Otto, who was nearly seven feet tall, wore the sweater for a while before it grew too big for him. As soon as she finished telling me be this very brief story my imagination began turning the concept over and over. “What a great story that would make for children!” I said, and that evening I started the first draft and completed the basic story a day or two later. While writing the story I simply ran with my imagination of what kind of tale I would love to have had read to me if I were still a kid, a fun adventure, a “what happens next” kind of story. I changed the facts to fit a more dramatic timeline. I had a grandmother knit the sweater for her youngest and smallest granddaughter. This way the sweater could stay in the family as long as possible before the family had to part with it. 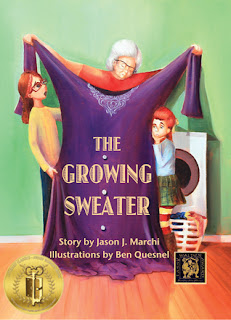