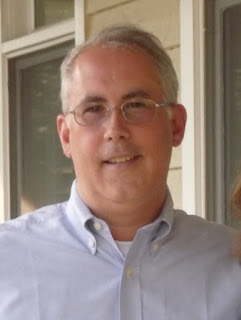 WHEN DID YOU FIRST KNOW YOU WANTED TO BE A WRITER AND WHY?
I can’t say that I ever decided to become a writer. As the centenary of the First World War neared, it became a subject that I wanted to learn more about and a subject that I wanted to translate into something that others could appreciate. The form of Kingdoms Fall, as an entertaining espionage, political, and military historical thriller came out of that objective. I really enjoyed writing the novel and am currently considering another subject to write about. They say everyone has one great novel in them. Perhaps when I complete my second novel I will consider myself a real writer.
​
AS A CHILD, WHAT DID YOU ASPIRE TO BE WHEN YOU GREW UP?
A spy, thanks to James Bond, of course.
​
HOW DID YOU GET THE IDEA FOR YOUR AWARD WINNING TITLE?
When I first chose to write about the First World War, my intent was to write a trilogy in which each novel would focus on the disintegration of one the three great monarchies that existed at the time the war began: The Austro-Hungarian Empire, the Russian Empire, and the German Empire. As I continued to conduct research, I realized that the story would necessarily involve the impact of the war on the rest of Europe, Great Britain, the Ottoman Empire, and the United States, as well. Still, the concept of the collapsing traditional systems of power and government remained a central theme, and when I accidentally discovered Psalm 46, I knew that “Kingdoms Fall” would express both the subject of the story and the destruction of war:
​
Nations are in uproar, kingdoms fall;
he lifts his voice, the earth melts.
Come and see what the Lord has done,
the desolations he has brought on the earth.
He makes wars cease to the ends of the earth.
He breaks the bow and shatters the spear;
he burns the shields with fire.
~Psalm 46 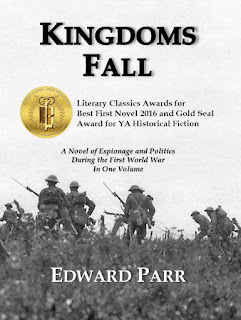 ​
WHAT IS YOUR FAVORITE LINE FROM YOUR AWARD WINNING BOOK AND WHY?
One of my favorite lines is character James Wilkins’ triumphant statement: “If there is a Hell, David, you will certainly be there, but you damn well won’t deserve it.” So much of what the protagonist spies do is morally ambiguous, in some cases outright wrong, but they are nevertheless compelled to do what they believe will serve their nation and win the war. In some instances, such actions have a personal cost; in others, they arbitrarily do not. I believe this expresses something about the amorality of war and the horrible toll exacted from soldiers and civilians.
​
WHICH OF YOUR CHARACTERS FROM YOUR AWARD WINNING TITLE DO YOU BELIEVE ARE MOST LIKE YOU AND WHY?
I would like to believe that I have in me a little of the more positive characteristics of both David Gresham and James Wilkins, even though I likely have some of the less positive characteristics as well.
​
WHAT MESSAGE DO YOU HOPE READERS WILL GLEAN FROM YOUR AWARD WINNING BOOK?
The First World War has often been labeled “The Forgotten War” since it was so quickly overshadowed by the Second. Yet I think it is important to place World War I, in context, as an unfortunate part of the long on-going evolution of human civilization, to understand where the conflict came from and the extent to which the combatant nations were left in ruins. It should come as no surprise that violent opportunists like Mussolini, Hitler and Stalin leapt in to fill the voids left by the war. But also the First World War made it possible for our more democratic civilization to arise from the autocracies of past centuries. I created a companion website, www.kingdomsfallnovels.com, as a source for readers to learn more about the war, and on my Facebook page, www.facebook.com/KingdomsFallNovel, I regularly post on the 100th anniversary of actual events that occur in the novel.
​
TELL US SOMETHING INTERESTING ABOUT YOUR EXPERIENCE AS A WRITER:
It took me about four years to write all three volumes of the novel, and during that time a great many people shared with me their own family histories of the First World War, from families forced to flee the Armenian genocide, to great-grandfathers who served in the trenches in France. I myself learned for the first time that my great-uncle, William Parr, served in France tending wounded soldiers. It’s amazing to me how many people have personal connections to this enormous event that no one seems to talk about.

​
WHICH AUTHOR HAS MOST GREATLY INFLUENCED YOUR WRITING STYLE?
By far the greatest writing influence for this work was Bernard Cornwell. I read and greatly enjoyed his series of “Richard Sharpe” novels set during the Napoleonic Wars which are light-hearted and enjoyable to read but also make it possible to understand major events and a whole period of history. I would also cite, as influences, Patrick O’Brian, John Le Carré, Ian Fleming, and John Buchan, the World War I era mystery and suspense writer whose style and language I attempted to bring into my own work set in the same era.
​
WHAT BOOK HAS HAD THE GREATEST IMPACT ON YOUR LIFE?
George Eliot’s Middlemarch: “[T]he growing good of the world is partly dependent on unhistoric acts; and that things are not so ill with you and me as they might have been, is half owing to the number who lived faithfully a hidden life, and rest in unvisited tombs.”
​
WHAT HAS BEEN YOUR GREATEST LITERARY ACCOMPLISHMENT?
Perhaps my greatest accomplishment was just finishing the novel! More seriously, I can’t tell you how much I appreciate the positive comments I have received in online reviews from total strangers; it makes the whole effort so worthwhile. And, of course, I am very proud of and grateful for my awards from Literary Classics.
​
DO YOU HAVE ANY WRITING RITUALS?
Writing is a surprisingly rigorous activity. It takes a great deal of concentration to keep all the threads of character, story and themes in your head as you write, and I found it best to write in the mornings after a hot shower and a strong cup of coffee, then focus on getting out at least one or two pages a day. Those pages quickly add up to a full length book.
​
HOW DID YOU FIND AN AGENT / GET PUBLISHED?
I made only a small attempt to find an agent, especially after I heard horror stories from a couple professional authors. In the end, I decided to focus more on writing and less on becoming a writer. I decided it was more important to get my novel out to readers than to sell myself. Self-publishing was a great alternative for me. I’ve found the process a great deal of fun, and I believe that a track-record of strong written work will attract new opportunities in the future.
​
WHAT DID YOU DO TO CELEBRATE THE PUBLISH DATE OF YOUR AWARD WINNING BOOK?
A self-published author’s work is never done! I celebrated my publication by updating websites and emailing friends and colleagues.
​
CAN YOU DESCRIBE THE PROCESS OF BECOMING PUBLISHED AND ANY TIPS YOU MIGHT OFFER FOR OTHER ASPIRING AUTHORS?
Having only published my original trilogy, I may not be qualified to answer this question, but I would say this: If you walk into any bookstore today, you will see countless professionally published books that are just awful, and the worst are the ones likely to sell the most copies. Honestly, anyone can do just as well or better on their own. We are privileged to live in an age when anyone can publish their work and make it instantly available to the entire world. Write what you love, get it out there, and let your work find its own audience.
​
CAN YOU OFFER ANY ADVICE FOR WRITERS ON HOW BEST TO PROMOTE THEIR BOOK?
Three things have been especially successful for me in promoting my book: Identifying and targeting blogs and online groups with related subject matter interests, especially those that are willing to read and publish reviews of your work; Amazon’s KDP Select’s free book and price promotions are great for distribution; and network your friends, family and colleagues to find book clubs that will read your book.
​
IS THERE ANYTHING ELSE YOU'D LIKE TO SHARE WITH OUR READERS?
Writing and reading are truly rewarding activities, and I would encourage everyone to write, to publish, and to read as many books as you can.
​
DO YOU HAVE ANY NEW BOOKS IN THE WORKS?
I am now conducting research for a novel set in the United States about a progressive rock band. I plan to begin writing in the next year.
​
​
​
​
​