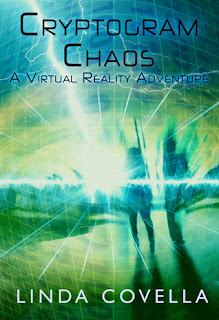 Cody is a truly gifted 14 year old.  He has a natural inclination toward developing and tweaking gaming software.  Not the coolest kid in school, he's really more of a techno-geek.  So when two of the most popular girls in school come to him with an idea for a virtual reality game, he thinks at first it might be a joke.  But the more he considers their concept, the more he realizes the technology is already in place and the timing is perfect to tap into this dramatically different twist on video games.  The concept is really quite fascinating.  Gamers can virtually experience all sorts of high energy, dangerous and thrilling adventures like sky diving and such.  In order to reach the next level and move on to a new adventure they must solve a puzzle.

After their game becomes wildly successful, Cody and his friends run into troubles which none of them could have ever foreseen.  Cryptogram Chaos, by award winning author Linda Covella, is an exciting and exhilarating book which will appeal to a broad tween audience, even those who may not have an interest in gaming.  The puzzles which must be solved to reach the next level of the game offer a unique and fun element to this wonderfully imaginative book.