Author Spotlight, D. A. Brittain on her award-winning book, Judah’s Scepter and the Sacred Stone 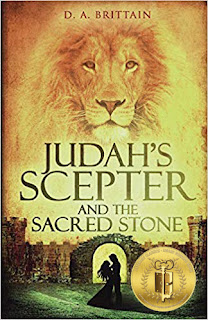 How did you get the idea for your award-winning book?
Initially, I envisioned my first novel as a young adult fantasy. But over time as I studied the Bible, I was drawn to write an adventure and love story which would entertain like a good fantasy that also included an inspirational story of faith. Specifically, I was intrigued by the Bible’s narrative of Israel’s patriarch Jacob, and the stone that he used as a pillow when he dreamed of a ladder rising into heaven and heard the voice of God. Over the years I read many legends and myths surrounding this sacred stone that some believe traveled with a prophet and a princess from Israel to Ireland. My interest in the Bible and the ancient legends became the inspiration for my story.

What is your favorite line from your award-winning book and why?
That’s an easy question to answer. “The archbishop placed a purple-velvet-bound Bible in the king’s fingers, then prayed: ‘Our gracious King, we present you with this Book, the most valuable thing that this world affords. Here is wisdom. This is the royal law. These are the lively Oracles of God.” This is my favorite because I do believe that the Bible is the word of God that can transform lives as it brings its reader into a relationship with their Creator. This line from my book’s epilogue comes from a scaled-down version I wrote of the United Kingdom’s coronation ceremony that’s conducted in present times, almost exactly as it has been for the past 900 years.

Which of your characters from your award-winning title do you believe is most like you and why?
Parts of me are most like Teia, my main character. Some of what I wrote at the time about her, what she felt and said was based on my feelings and words. Teia also has dreams and desires for her life but sets them aside to follow the plans that God has for her, regardless of what she may suffer or lose along the way. But then, in the end, she realizes that no matter what trials she’s faced, she never needed to doubt that God was with her and would always be guiding her path.

What message do you hope readers will glean from your award-winning book?
Well, I hope while reading a heart-pounding adventure, and sweet love story, readers will also take to heart the story of faith that might give them hope and comfort in knowing that there is a God who loves them and there is a purpose for their life.

What inspired you to become a writer?
I guess it began with my life-long love of reading. I’m grateful for all the great stories I’ve read since I was a little girl up until now, so to be able to give someone else that kind of enjoyment from a story I’ve created, well, that’s a dream come true. I’ve had stories in my head since I was fourteen when I first started writing poetry and then short stories, but I always dreamed of writing a novel.

Who has had the greatest influence on your writing style?
I honestly don’t know. I don’t think there’s been anyone that’s influenced my style. For me, it may have come more from the fairy tales I read when young. I still love the words, “Once upon a time.” I don’t have a favorite fiction author. Although, I do read a large amount of biblically-based fiction, some mainstream YA and adult fantasy, and occasionally YA and adult Sci-Fi. I enjoy escaping into a good story that takes me to a far-away time or to make-believe worlds. I think that’s why I wrote a story with a bit of a fairytale feel to it.

Tell us something about your experience as a writer:
While writing Judah’s Scepter, there was a time when I was being told (in my head) to make one of my characters evil. I liked this character and wanted them left as a moral person. However, the voice in my head kept telling me that person was heartless and I needed to write them that way. I began to argue with myself! I finally gave in and changed the character and modified some of the storylines. And because I did, the overall story became much better.

Tell us a little about your writing process:
I don’t make an elaborate outline or create detailed character descriptions before I begin to write. A general overall idea comes to mind before I start, and then when I write, I see the setting and characters in my head and hear them speak. I become immersed in their world. As I continue to write, more characters arrive on scene as the story takes on various twists and turns and new plotlines emerge. Often, I’m unaware of what will happen to some of the characters. I usually know my ending, but what happens in-between can even be a surprise to me!

Also, because I write historical fiction, I spend a significant amount of time on research. I spend months reading books, studying maps and perusing information found on official historical websites.

What is your greatest challenge as a writer?
That’s easy to answer; Finding enough time to write. The desire to write is always there. However, like most people, I have a busy life with many commitments to family, friends and church activities. All of which are very important to me, but often leave little free time for me to write. But I do my best to write as often as I can.

If you could be compared to a well-known author, who would you most want this to be?
That’s a hard one for me to answer. I’ve never thought in those terms. William Goldman wrote The Princess Bride, which was a book I really liked, as well as loving the movie. However, he wasn’t a writer of religious fiction, as I am. I honestly can’t think of anyone to compare myself to. I’ll leave that for the readers to decide. Publishers Weekly chose Connilyn Cossette’s Out of Egypt series as similar to my book. I thought that was a nice comparison.

How did you get published?
After waiting seven months and hearing nothing from a traditional publisher who had my manuscript, followed by another publisher informing me that I had to change a lot of what I wrote, or they wouldn’t publish my book, I decided to go it alone and self-publish. It was a lot of work, but in the end, with the help of a wonderful editor and creative cover designer, I was very pleased to have my story published the way I wrote it and envisioned it in print.

Can you offer any advice for writers on how best to promote their book?
It seems like everything keeps changing, so if you don’t have a publicist and are going it alone, for now, I’d advise writers to set up an author’s page on Goodreads, which is owned by Amazon. There, they can run giveaway contests and advertise their book to Goodread's millions of members. Also entering, and hopefully winning respected contests, like Literary Classics, is an excellent way to receive recognition and promotion for your book!

And finally, acquiring good editorial reviews from leading industry organizations like Publisher’s Weekly can provide creditability for the professional quality of your book. Editorial reviews can be included on your book cover, website, Amazon and any other retail sites and social media sites an author might have.

What has been your greatest literary accomplishment?
The commercial part for me would be, that as a first-time author, having Publisher’s Weekly select my book for review and then to receive a good review still feels a little unbelievable. I’m also very grateful for the awards my book has received. But what really means a lot to me are the thoughtful and positive reviews and emails I’ve received from readers who have enjoyed my book. Bringing joy to someone else through my writing feels like a wonderful accomplishment.

What are your greatest literary aspirations?
For now, it would be to complete the second and third book in the Judah’s Scepter series. Through my stories of adventure and romance that I hope entertain, I also hope and pray that the readers will find themselves drawing closer to God. That’s why I write.

Tell us something people may not know about you that they might find interesting:
Hmm. I’m not sure what they would find interesting. One thing I could share is that I’m an introvert at heart. I’m more comfortable sitting alone and writing in my home office; more than I would ever be speaking in public! I’m okay in small or medium-size groups but speaking before a large crowd … that’s not for me. Sounds terrifying! But I’m learning to step out of my comfort zone to do whatever I’m called to do.

Is there anything else you’d like to share with our readers?
I guess I would like to tell them how much authors appreciate hearing from them. After what might be years of putting your heart into a story, and the long road to seeing it published, it’s always nice to know that someone else has enjoyed what you’ve created. So, when a reader takes the time to rate a book, write a review, or send a short email to an author, it’s always greatly appreciated.
Do you have any new books in the works? If so, tell us a little about your next book, when it will be available, where it can be purchased.

Yes, I’ve almost completed the first draft of the second book in the Judah's Scepter series. This story takes place mostly in thirteenth-century England and the Holy Land. It’s another adventure and story of faith with a sweet romance between a Jewish maiden and a Christian knight. The final crusade to the Holy Land also plays a part in this story. The sacred stone will return as I follow the historical records and write about England’s King Edward I, bringing the stone from Scotland to England and commissioning a chair, a throne to hold the stone that was used then as it is now, to crown the British monarchs. If all goes as planned, editing and the cover design will take place with publishing by early to mid-2020.