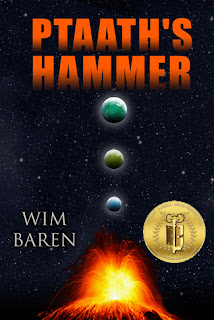 WHEN DID YOU FIRST KNOW YOU WANTED TO BE A WRITER AND WHY?
In 2014, I had an idea based on my reading of a history of Byzantium. From there, with a lot of research, I crafted The Crimson Emperor. I haven’t stopped since.
​
AS A CHILD, WHAT DID YOU ASPIRE TO BE WHEN YOU GREW UP?
I never really knew, but I loved designing things, or improving things.  I especially liked learning things.
​
HOW DID YOU GET THE IDEA FOR YOUR AWARD WINNING TITLE?
The anti-hero, Phocas, had a terrible reputation as a usurping Emperor. His reign was bloody and vengeful. The color fit.
​
WHAT IS YOUR FAVORITE LINE FROM YOUR AWARD WINNING BOOK AND WHY? “One God, One Faith, One Church, One Empire…” It sums up the dominant spiritual motivator for much of the action.
​
WHICH OF YOUR CHARACTERS FROM YOUR AWARD WINNING TITLE DO YOU BELIEVE ARE MOST LIKE YOU AND WHY?
I never looked at them in that light. Perhaps Romulus, because he loved an active regimen and pursued the highest levels of excellence in what he did. Also, he was a highly romantic actor.
​
WHAT MESSAGE DO YOU HOPE READERS WILL GLEAN FROM YOUR AWARD WINNING BOOK?
History is so full of the most amazing stuff, no one should ever feel they’ve run out of ideas for stories. Pick any place and any time, and you’ll be amazed.
​
TELL US SOMETHING RANDOM/INTERESTING/FUNNY ABOUT YOUR EXPERIENCE AS A WRITER:
Since I started writing, I found it enjoyable to create mini-broadsheets (maybe 1500 words each) on creative writing, to share what I’ve learned with others.  I also found that certain music pieces become embedded in my mind as I write, a given piece associated with a given story. Weird, I know.
​
WHICH AUTHOR HAS MOST GREATLY INFLUENCED YOUR WRITING STYLE?
H. Ryder Haggard, Eric R. Eddison (The Worm Ouroboros Quartet), Jane Austen (any of her novels) and Anthony Trollop (The Pallisers).
​
WHAT BOOK HAS HAD THE GREATEST IMPACT ON YOUR LIFE?
The Bible
​
WHAT HAS BEEN YOUR GREATEST LITERARY ACCOMPLISHMENT?
The Crimson Emperor winning the Literary Classics Silver Medal for Young Adult Historic Fiction in 2015, and now Ptaath’s Hammer winning the Literary Classics Gold Medal for Young Adult Fantasy Fiction in 2016.
​
DO YOU HAVE ANY WRITING RITUALS?
I select a specific piece of music to put my mind in the right frame, and will repeat the piece throughout the writing session. It gives me a creative flow that helps ideas coalesce.
​
WHAT DID YOU DO TO CELEBRATE THE COMPLETION OF YOUR AWARD WINNING BOOK?
Dinner out with my much better half, plus sharing the news with a few long-time friends whose judgments I value.
​
​
DO YOU HAVE ANY NEW BOOKS IN THE WORKS? Another Historic Fiction work, Empire and Triumph, a kind of sequel to The Crimson Emperor. Hoping it will be completed by January 2017. About half a dozen other ideas are on the writing table, with a few bits and pieces fleshed out.
​
When released, it will be on the Smashwords.com website.
​
​
​