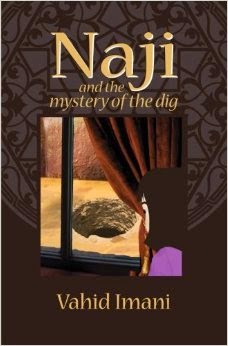 Naji and the Mystery of the Dig is the highly engaging tale of a day in the life of  Naji, an eight year old girl growing up in Persia during the 1940s.  One morning Naji is awakened by the sound of men working out in her family's courtyard.  As she soon learns, it has been over thirty years since their family built its first septic tank and now it is time for a new one.  The men are working on its replacement as they dig a hole deep in the earth using pick axes and shovels.

Naji has an overwhelming sense that something is lurking below the surface of the dig.  Her childlike curiosity nearly consumes her with a need to peer down inside.  As the day progresses the hole becomes deeper and deeper as she tries to persuade her family to allow her to peek into the mysterious hole.  A sense of urgency overwhelms her as she realizes she must persuade her father to let her have a look soon before the opening is covered back up.  The longer Naji must wait to satisfy her curiosity, the more her imagination fuels the wildly creative scenarios she has conjured up in her mind.

As Naji's story progresses, readers are introduced to Naji's world, a place steeped in a rich and colorful history filled with lovely customs and traditions.  Unfamiliar words and phrases are highlighted in italics indicating that a definition has been provided at the back of the book.  Each definition goes into detail offering an interesting bit of background which further enhances the interest and educational value of this enticing book.

Author Vahid Imani has crafted a book which is sure to hold the interest of young readers while offering a rare and enchanting glimpse into the fascinating culture of Persia in the 1940s.  This book comes highly recommended for classrooms and school and home libraries.  Naji and the Mystery of the Dig has earned the Literary Classics Seal of Approval.