A Must Read For Every Aspiring Young Comedian 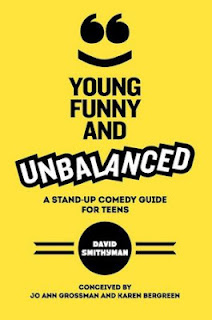 Ahhh...  This book could have been something different.  But it was not.  It could have been harsh, abrasive and "in-your-face".  Again, it was not. Author David Smithyman uses just the right amounts of humor, satire, and honest-to-goodness straight-talk in this book which was created for teens who want to do stand up comedy.  Most notable, and much appreciated, is the occasional reminder to be sensitive to others when telling a joke -- that jokes at your own expense are acceptable... at the expense of others, not so much.  Also, the author does not talk down to his audience.  He treats his readers very much like young adults.  His humor and wit is ever-present in this book which is a delight to read.  --Oh, and he provides great tips on how to write a humorous punch-line.  This book comes highly recommended.

And before you start thinking, 'those who can't . . . teach', you might want to take a look at Mr. Smithyman's bio.  He, and his collaborators on this book have a pretty impressive track-record of success in the world of comedy.

This book earns the Literary Classics Seal of Approval

Email ThisBlogThis!Share to TwitterShare to FacebookShare to Pinterest
Labels: books about comedy for kids, Comedy for teens, comedy for tweens, How to become a comedian, I want to be a stand up comedian, teaching kids to be comedians