Gopher to the Rescue - Recommended as an Educational Aid 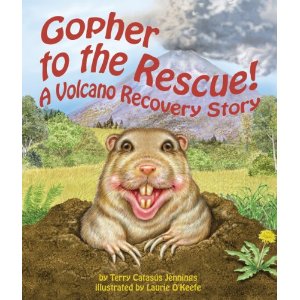 Gopher to the Rescue  A Volcano Recovery Story, written by Terry Catasus Jennings and illustrated by Laurie O'Keefe, is a picture-book depicting the story of wildlife creatures on a mountain range which are affected by a volcano that destroys their habitat.  Gopher, protected by his underground tunnels, is unharmed from the blast of the volcanic explosion.  Meanwhile other animals run to save themselves from the fall-out while others are injured or killed.  Afterward most of the animals stay away because there is no longer enough food available for them to survive.

But gopher still finds tasty bulbs and roots to eat.  As he burrows through his tunnels, he transports seeds and churns the soil, making the ground fertile and helping to propagate new life.  The few remaining creatures . . . mice, ants, beetles and pollywogs are joined by other creatures who are able to return and survive in the desolate conditions.  Months and then years pass before many of the wildlife animals are able to fully return.

Gopher to the Rescue is an educational book full of interesting details about habitat revitalization in the aftermath of traumatic volcanic activity.  Scientists spent years studying life as it slowly returned to a liveable state following the affects of the volcano eruption at Mt. St. Helens in 1980.  This fictionalized story is based upon their research of the recovery of a volcanic region.

Gopher to the Rescue is a valuable teaching tool for children.  Readers may visit the publisher's website for further educational opportunities related to the topic of volcano recovery.  We recommend this book as a learning guide and as an aide in classroom settings.  Gopher to the rescue has earned the Literary Classics Seal of Approval.